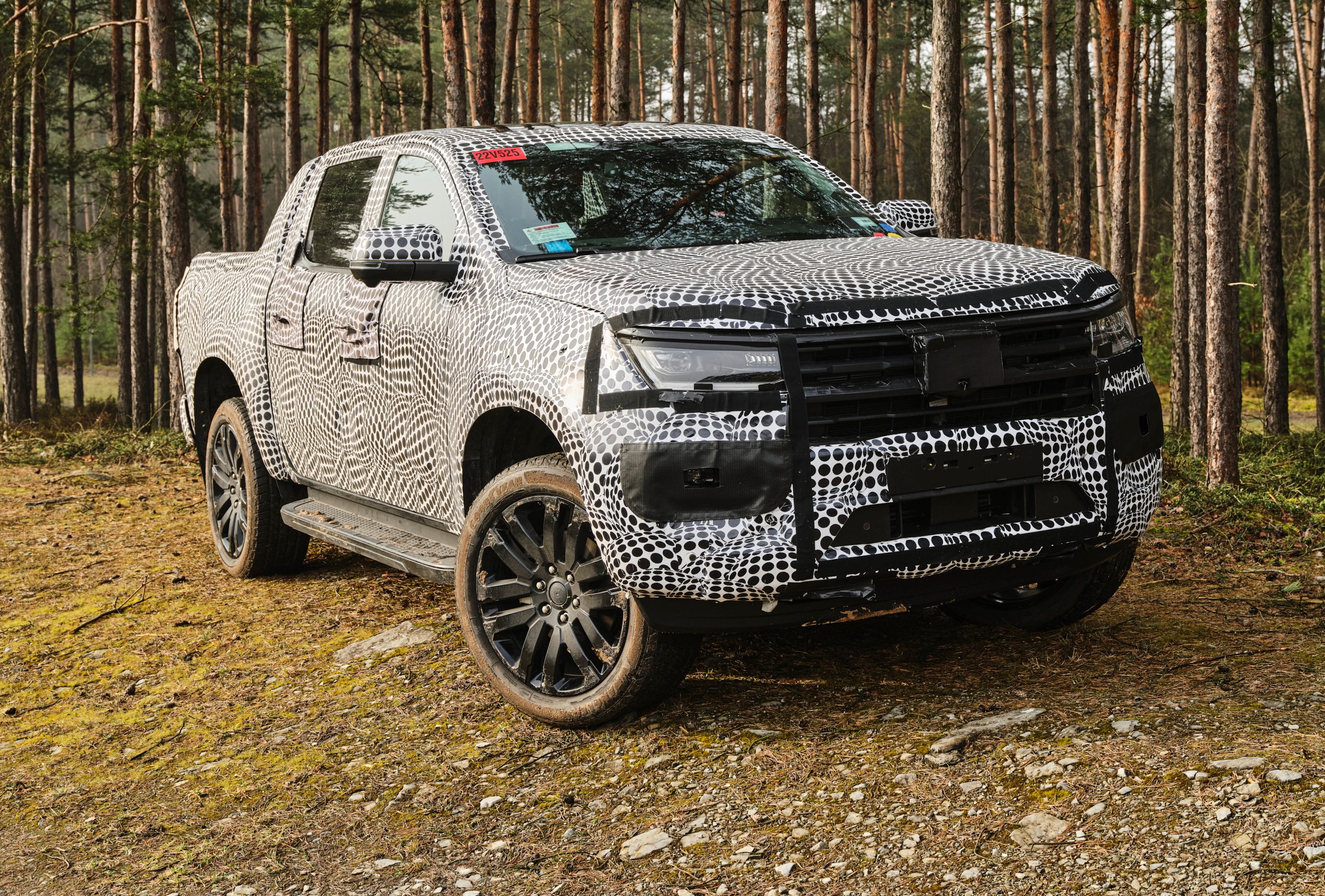 WOLFSBURG, GERMANY – The second generation Volkswagen Amarok will adopt a bold new look and grow to a length of 210.6 inches. (5,349 mm) in double-cab guise, an exclusive behind-the-scenes visit by WardsAuto to the German automaker’s headquarters reveals.

The refreshed look and larger dimensions, however, are just a sliver of the full scope of modifications and changes under the metal made to the ’22 model, seen here in prototype form ahead of a planned unveiling in June.

Set for sale in the African, Asian, Australian, European, Middle East and South American markets, the Amarok has been developed in the so-called “Global Alliance” between VW’s Commercial Vehicle division and Ford. Its chassis, suspension, drivetrain and gearbox as well as key elements of its body, interior, electrical architecture and digital functionality are shared with the fourth-generation Ford Ranger introduced in 2021.

Both are based on the same T6 ladder-frame chassis – a box-section steel structure built by Ford but modified with input from VW, according to Lars Krause, VW Commercial Vehicles board member responsible for marketing.

“The Amarok is a much better pickup than if Volkswagen did it themselves,” he said. “The same goes for Ford. Without our input, Ranger wouldn’t be so great. This partnership has allowed us to bring together our individual strengths.”

VW did not discuss the possibility of selling in North America. However, a trademark filing for the Amarok name was made in the US in 2018.

To avoid the 25% tariffs that apply to imported trucks, they need to be manufactured in North American factories. With the new Ranger set to be produced at Ford’s Assembly Plant in Michigan, this is a distinct possibility given that other markets will initially receive the Amarok from Ford’s plant in South Africa.

Like the first generation model introduced in 2010, the new Amarok will be offered in 2-door and 4-door dual cabin body styles.

The bolder styling gives the small pickup a more confident look than ever. Drawing on a previewed look by the Atlas Tanoak concept that was revealed at the 2018 New York auto show, it was designed in a studio set up at Ford Australia headquarters in Broadmeadows, Victoria.

It builds on the lineage of Amarok’s first generation design (pictured, below)adopts a bolder front end with a higher front edge and a more prominent grille.

Common exterior elements include the windshield, roof, side windows, rear windows, mirrors, and door handles – the latter of which is shared with the Ford F-150.

The cargo bed is dimensioned to allow euro pallets to be loaded sideways and fastened in place using tie rings integrated into the bed. An electric roller shutter will be offered as an option.

Along the sides are rear wheel arches that are more prominent than previously seen. There are new LED taillights and it features a new look tailgate with the Amarok name stamped into the metal. The wheels extend from the standard 17 inches. up to 21 in. in diameter.

It also accepts 4.9-in. (125-mm) wheelbase is longer than before at 126.8 in. (3,221 mm) in double cab body style. These changes provide shorter overhangs both front and rear, and with them a claimed increase in approach and departure angles.

The engine lineup mirrors the Ranger. Includes four turbocharged diesel engines in both 2.0L 4-cylinders. and the form of the 3.0L V-6, ranging from 168 hp to 237 hp. A turbocharged 2.3L 4-cylinder. the petrol unit produces 298-hp.

Buyers will be able to choose between standard rear-wheel drive and two different all-wheel drive systems depending on the engine, the automaker said.

Although the Ranger will be sold with a petrol-electric plug-in hybrid drivetrain option, it is not planned to be offered with the Amarok. However, VW is conducting engineering studies to provide VW pickups with an electric drivetrain.

The interior is architecturally similar to Ford’s, but receives VW’s signature touches, including its own multifunction steering wheel, loveseat, controls and unique trim.

Digital display charts for instruments (standard at 8 in. [20 cm]) and infotainment system (standard at 10.1 in. [26 cm) and optional at 12.0 ins. [30 cm]) is unique to Amarok but features the Ford-developed SYNC4 operating system used by Ranger.

The 2023 model year Amarok receives up to 30 driver assistance systems, more than 20 of which are claimed to be entirely new. The over-the-air functionality will allow software upgrades of various systems.

The new Amarok is supported by suspension with double wishbones at the front and beam axles with leaf springs at the rear – essentially the same setup used by the Ranger. As on the old Amarok, the rear silencer is mounted on the outside.

Initial production will take place with the Ranger at the Ford Silverton plant in Pretoria, South Africa. Meanwhile, the first-generation Amarok will continue to be produced at VW’s plant in General Pacheco, Argentina, for sale in select South American markets.